“Wanderer, there is no path/ The path is made by walking.”
Antonio Machado

This is my invitation to practice giving and receiving in the spirit of service, of authenticity and of abundance.

Wholeness is a quality of consciousness of life

The Fool as archetype and symbol is recognised in Eastern and Western traditions alike.

“To strengthen what is right in the fool is a holy task,” says the I-Ching.

“The Fool is not a philosophy but a quality of consciousness of life,” says Cecil Collins, the great English painter of the 20th century.

The I-Ching is also called the Book of Changes, describing 64 states of an eternal flow. In the Tarot deck, the Fool is allotted the number 0 and comes before all other 21 cards of the so-called major arcana, the heart of the full deck of 78 cards. The 22 cards of the major arcana can be taken, in order, to symbolise the stages of our potential for inner growth from the wide-eyed innocence and complete unconscious immersion of our childhood which we lose but may regain again as our inner Fool meets and integrates 20 archetypes along the way until we return to Wholeness, represented by the 22nd card, the World.

The Jungian psychologist Marie-Louise von Franz recognises the Fool’s journey emerging from the fact that the Fool is at home in our inferior psychological function, opposite to the Hero, offering us a very special opportunity: “It represents the despised part, but also the part that builds a connection to the unconscious and therefore carries in itself the secret key to the unconscious whole.”

Herman Hesse, in his novel Demian, has the character Pistorius say, “There is a great deal of difference between bearing the world within you and being conscious of that piece of knowledge. […] You do not think of all the bipeds who walk along the street as human beings merely because they walk upright and carry their young nine months! […] Human potentialities are present in each one of them but only when they realise them and learn to make them to some extent a conscious part of themselves, can the individual be said to possess them.”

The Quantum Poet gives it forward

A modern articulation of such a journey made up of different energetic states, entanglements and jumps is to be found in quantum mechanics.

On my path, I use a pen as my walking stick to trace my journey. I write because it is my nature. It is my witness statement of my states, of my entanglements, of my leaps and jumps, of my human becoming. If you recognise any art or wisdom in what I have written, it is because I am a channel of the source, not its creator or originator.

This is why everything on this website is offered “open source” as specified under the Creative Commons license CC-BY-SA 4.0. I invite you to use my work in your own life and in the lives of those you serve as you wish, and to give appropriate credit for my contribution.

Called forth from what we may become

It is about calling out into the universe and finding the response rising from within. Being me transcends the social niche into which I was born. It transcends the niche in the larger than human community. Being me means to emerge from the unique point where the ends of the universe intersect once and for all and never again as the potentially conscious condensation of the field entangled in spacetime, in this universe, in the larger-than-human ecosystem, in humankind, endowed with all that came before, called forth from what we may become.

The forest ecologist Suzanne Simard who changed our view of trees, their connections to one another and other living things, in her beautiful memoir Finding the Mother Tree wisely asks:

I know what she means and from her work, I believe I understand her intention behind this articulation as entirely in line with the spirit of This Fool’s Manifesto. Yet, I feel this spirit has an even deeper source. I have allowed myself to reframe it more openly and into the emerging future:

If I give it forward, who may we become?

In service of abundance

I see abundance all around me. I feel it in me. I see that there is plenty to go around. And I see that this is also how I came to be here.

I also see that when I expect something in direct return for what I have to offer that I come to suffer the experience of there not being enough, of scarcity. This is when I confuse my self-worth, my creative gift and my reward. It gets compounded further when I am out of integrity with my true nature which does not require as much to be as I sometimes think it does.

You will not find my work advertised with a set price. It is because I respect you, deeply, and I therefore don’t impose an idea of a price on you. But, also, I respect myself and my work. That is why I don’t give my work away for free. I practice receiving from where it comes my way as much as giving to where it flows. As I have learned from my dear friend Sujith Ravindran, modern mystic, author and initiator of the BEING Abundance Movement*:

Giving and receiving occurs non-locally in time and space. You might extend your help to someone today, and sometime in the future you will receive the rewards of your service from that person or another. Or, in the past you may have already received from someone the reward for this help that you are about to offer today. That is the law of non-locality.

The Seven Mystical Laws of Abundance by Sujith Ravindran

And so, I give it forward with non-attachment to the outcome of who reads it, to what purpose, with what reaction, and what you are able and ready to give for it. I do so by making my work available without restriction of cost and without resistance to receive the gifts that may come my way. If you are drawn to my work at this time for your own reasons, I do not have the expectation that you can or will reward me with a payment now.

If you find yourself touched by my work, you are invited to share your appreciation in whatever form including donations through the website or in whichever form is appropriate to you, now or in the future. And it may well be that I have already received my gift from you.

In a poem to my sons called I Am Your Vessel, Not Your Captain, I described this spirit in 2004 in my own way:

I’ve been sailing under your command,
Since long before my own adventures
To a world that once was mine and now is yours —
May you make it someone else’s.

I Am Your Vessel, Not Your Captain by Marcus Demetrius Link

I am blessed that you have read these words.

* I acknowledge gratefully the articulations in the constitution of the BEING Abundance Movement which have made it possible for me to articulate This Fool’s Manifesto.

A Gift from Me to You 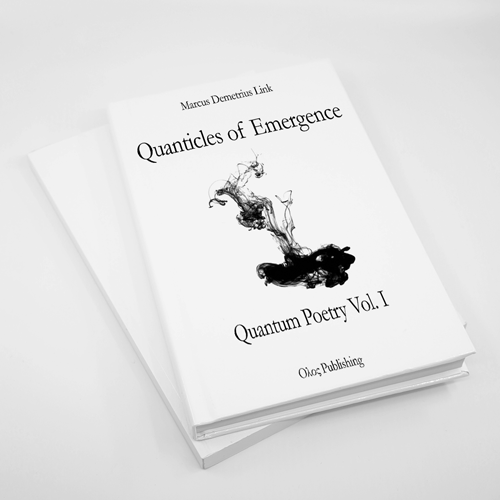 Quanticles of Emergence is a collection of eight poems written over the last 20 years. It is an excavation of timeless symbols, revealing ancient and new perspectives on what it can mean to wrestle with and discover one’s sense of self and purpose, distilling meaningful wholeness out of the disparate fragments and dualities of existence.